Mount Kenya is Africa’s second highest mountain at 5,199m (17,058 feet) and the highest of all Kenya Mountains. Mount Kenya is roughly circular, about 60km across at the 200mm contour, where the steep font hills rise out of the gentler slopes of the centered highlands.At the centre of the massif, the main peaks rise sharply from around 4,500m to the main summit of Batian 5,199m, Nelion 5,188m and point Lenana 4,985m. Other major summits on the mountain include Point Piggott 4,957m, Point Dutton 4,885 and Point John 4,883m. Of the three main peaks (Batian, Lenana and Nelion), only point Lenana can be reached by trekkers and the other two being only for technical climbers. 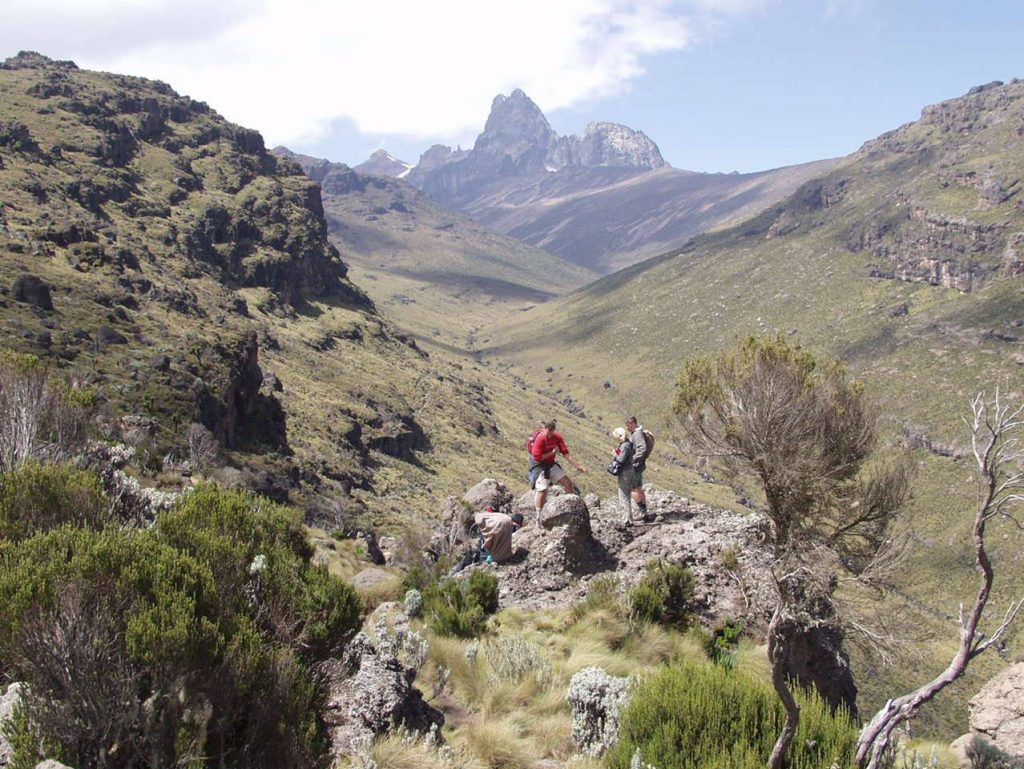 Mount Kenya is the second highest peak in Africa and stands somewhat unjustly in the shadow of it’s taller neighbour Kilimanjaro, which lies some 320km away in the south and is visible on a clear day. Kili may see much more traffic – due to the possibility of summitting via several non-technical trekking routes and due to the sometimes dubious honour of being one of the Seven Summits – but Mount Kenya offers a wealth of excellent and diverse climbing possibilities on rock, snow and ice.

The rock on Mount Kenya can be of variable quality but is at it’s best high on the mountain where the syenite rock is similar to granite – rough, hard and well endowed with features.

Apart from the superb climbing potential on Mount Kenya, its tarns and alpine meadows; exotic, equatorial, high-altitude vegetation; sunbirds, hyrax and soaring eagles make the walk around the peaks one of the most beautiful expeditions in the East African mountains.

After the cultivated farmlands on the lower slopes the trails pass through the rain forest, rich in trees of many species but noticeably camphors, then onto a bamboo zone growing to heights of more than 12m or more up through open moor land before reaching the moonscape of higher slopes. The forests are rich in wildlife including elephant, buffalo and monkeys with even the moor lands offering a long list of mammals including the rock hyrax, the nearest living relative of the elephant.

Mt. Kenya is an ancient volcanic mountain much older than Mt. Kilimanjaro. It’s believed to have once reached well above 600m. What is left today is volcanic plug which erosion has fashioned into the complex jagged outline of the central peaks.

The last stretch from the nearest town to the various trailheads (typically +/- 25km) will be on dirt roads and these can be in poor condition (especially in wet weather) and require a 4WD, or an approach on foot.

When to Trek Mount Kenya

Although, Mount Kenya can be climbed all year round, the highest rainfall occurs between late March and the middle of May, and slightly less between late October and mid December. Maximum rainfall occurs in the forest belt and on the south-east side of the mountain where it reaches 2500mm. per year at 3000m. Rain and, higher up, snow can however be encountered at any time of year – even in the driest periods (January and February). Normally the drier seasons are associated with clear, dry weather which can last for many days on end. The best weather is generally in the mornings, and convectional rainfall, if any, tends to come in the mid-afternoon.

Temperatures vary considerably with height and with time of day. At 3000m. frosts can be encountered at night while day temperatures range from 5 to 15°C. Night time temperatures on the summit are well below freezing. The south-facing side of Mount Kenya receives more sunshine in the December to March period. During this time rock climbs are “in-condition” and snow and ice climbs gradually deteriorate. In the June to October period the north-facing rock climbs and south-facing ice climbs are best.

It’s safest to climb Mt. Kenya during the dry seasons: January – February and August to September off the most reliably fine weather. The main routes are likely to be more crowded at this time of the year. If you favor complete solitude over the sunny skies, try going slightly off the peak season. It’s best to avoid the two rainy seasons from mid March until June and from late October to the end of December. 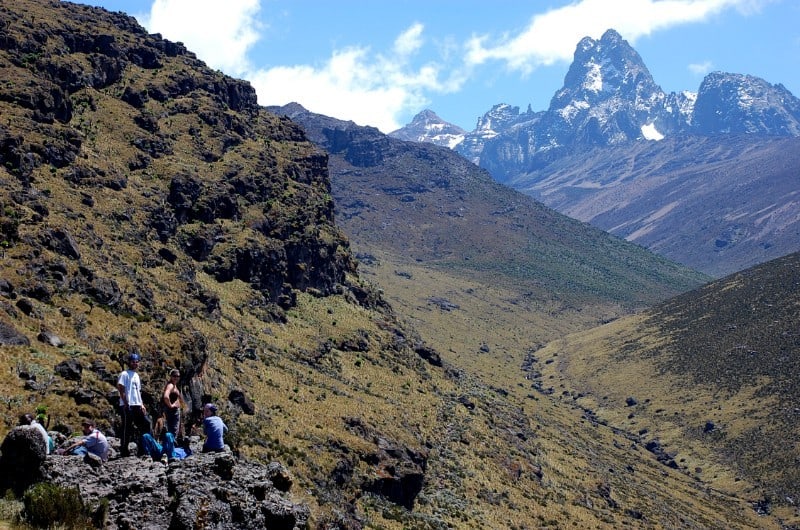 Mount Kenya VegetationMount Kenya is home to some fascinating high-altitude alpine vegetation including giant groundsels and lobelias.
In the lower-altitude forest zone trekkers may come across some rather large and uncompromising African wildlife such as elephants and buffalo – fortunately these are mostly active only at night. Lions, leopard, rock hyrax, various antelope species and a wide range of other creatures large and small occur in the park.

Mount Kenya Forest Vegetation And Coverage In Percentage:
Bamboo – 10%
Bamboo and Forest Mix – 23%
Forest – 32%
Bushy Forest – 11%
Grassland – 8.5%
Plantation – 9%
Other – 6.5%
Mount Kenya climbing Routes/ItinerariesThere are three main routes, which penetrate the forest and the moorland. The routes are Naromoru route, Sirimon route and Chogoria route and each of which has something different to offer.  The Trek Mount Kenya Climbing Expeditions has offers for the below hiking routes. It is possible to combine hiking Mt. Kenya with Kenya safaris.

Climb Mount Kenya Naromoru route – The fastest route to point Lenana but not as scenic as the other two. It is often overcrowded with many climbers since it’s the most popular route compared to Chogoria route and Sirimon route trek Mount Kenya.

Mount Kenya Climbing Chogoria route – The most scenic and interesting of the three main routes on the mountain. The route passes the enchanting Hall Tarns and looks down sheer cliffs into the spectacular Gorges Valley and onto the beautiful Lake Michaelson.

Climbing Mount Kenya Sirimon route – The least used of the three main routes, but features the most gradual ascent profile and best acclimatisation options and above all the most interesting since its on the drier side on the mountain. The route passes through impressive Yellowwood forests in the lower reaches and features abundant wildlife and beautiful alpine scenery higher up.

There are other four climb Mt. Kenya routes up Point Lenana but are least known and used. These are: Burguret Route, Timau Route, Meru Route and Kamweti Route

Note: The normal pattern of weather on Mount Kenya is for clear mornings with mist closing in from 10:00am although this can clear by evening. Therefore, early morning climb Mt Kenya starts are the order of the day with a 2am start for the final ascent to point Lenana, if you want to catch the sunrise.  Go to Mount Kenya now and experience the majestic sunrise over Mt. Kenya. Sirimon route Mount Kenya is one of the best routes to use to hike to Lenana Peak. 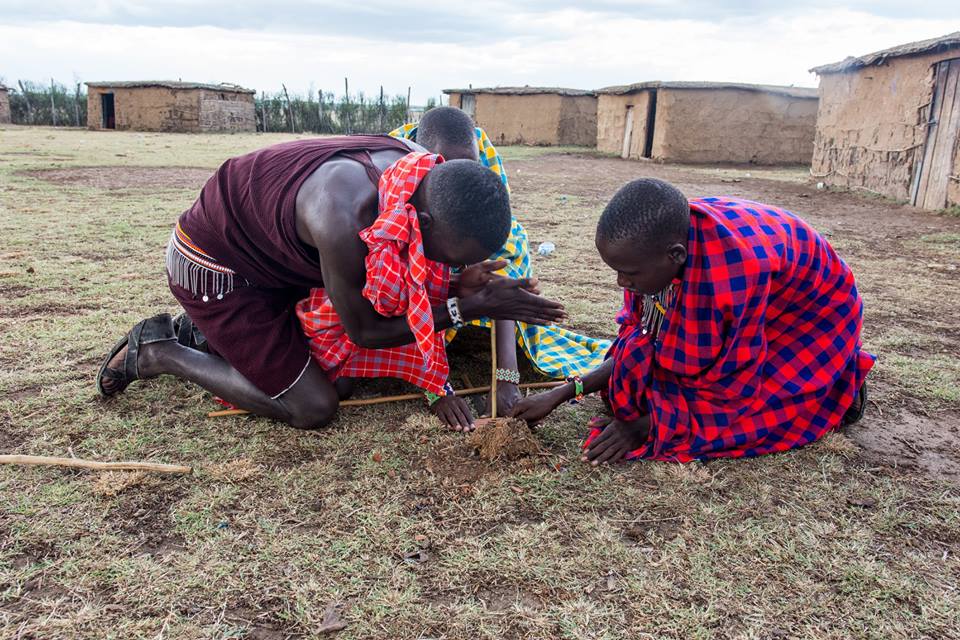 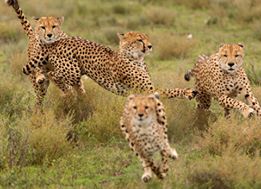