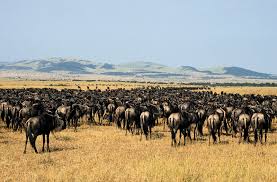 we pick you up at 0730 am from the hotel, then proceed to Lake Manyara for a full day game drive in beautiful Lake Manyara National Park. You will be able to See buffalo, giraffe, zebra and many more species, all set against the stunning backdrop of the Great Rift Wall. Lake Manyara National Park is one of the parks which inhabits a lot of the Flamingos as well as huge elephants, we also have hot springs at the edge of the lake, the whole day will be spent exploring the park which will take you as well as in the hippo pool,on this day you will have your picnic lunch with you to avoid coming back to the hotel for lunch the whole day will be maximized in the game drive. After the whole day game drive leave the park around 1830hrs and proceed to the Hotel. Dinner and overnight at Lake in Lake Manyara Wildlife Lodge or in Mto Wa Mbu Tented Camp

Wake up call around 0600am, have your breakfast, there after check out the hotel and Set out for the endless open plains and stunning skies of the Serengeti. On this day you will have an opportunity to visit the famous Olduvai Gorge the site Olduvai Gorge – a renowned archeological site famous for some of man’s earliest remains, you will have a lecture at this point as well as your lunch, there after you will have a drive to Serengeti, this normally takes like 4 hours, on arrival proceed to the game drive en route to your Hotel, after the game drive check in the Hotel around 1830hrs for dinner and overnight in Serengeti Wildlife Lodge or Seronera Camp

On this day, you will have the whole day game drive, after the breakfast our driver will have your picnic lunch with you so that you may have enough time to explore the park for the whole day,The Serengeti National park has also been declared a World Heritage Site, and covers over 14700 sq km of prime African wilderness. It actually forms one ecosystem with Kenya’s neighboring Masai Mara Game Reserve, and plays and integral part in the annual wildebeest migration that moves in a circular fashion between itself and the Masai Mara (in Kenya). The terrain is most famously characterized by the endless grassy plains dotted, at times, by millions of head of game – the classical ‘Out of Africa” feel. However certain parts also are covered in the Acacia savanna, dense wooded hills or rocky outcrops known as koppies, as well as pans and lakes. The abundance of African wildlife is of course what makes it such a sought after safari destination, and includes healthy populations of lion, buffalo, impala, hippo, waterbuck, elephant, cheetah, leopard and a host of other game species – not mention the more than 400 species of birds. Dinner and overnight in Wildlife Lodge or Seronera Camp

Wake up call at 0600am have just a cup of hot coffee, then proceed for the early morning game drive, this early morning game drive is very important as you will be able to see the morning kill from the big five, this normally takes you until 0930hrs, then return to the Lodge or Camp for the main breakfast, After the breakfast check out the Lodge or Camp and proceed for the final game drive as you check out the Park and proceed to Ngorongoro, where the night will be spent on the Crater Rim. Dinner and overnight at Ngorongoro Wildlife Lodge or Simba Camp

After the breakfast check out the Lodge or Camp early in the morning as at 0730am, we will descend to the floor of the Ngorongoro Crater for a full day explore game drive tour. We take a picnic lunch and this will be served in the crater next to the hippo pool, at this point you will be able to stretch your feet and visit the washrooms. The Ngorongoro Crater is recognized as a UNESCO protected World Heritage Site and forms part of an international biosphere reserve. The crater measures approximately 300 sq km and measures about 19 km across. The floor of the crater is 600 meters below the rim, (which is over 2200 m.a.s.l), and is home to an abundance of wildlife including black rhino, lion, cheetah, buffalo, elephants and a plethora of antelope species. Late in the afternoon we ascend the crater and then proceed to Tarangire. Dinner and overnight at Tarangire Sopa Lodge or Tarangire Camp

Tarangire National Park - Back To Arusha

Early breakfast,then proceed for a full day game drive, you will be able to witness hug herds of elephants for Tarangire National park is famous for the huge elephants or known as home of elephants, on this day we will have picnic lunch with us and we normally have our lunch at the view point of Tarangire. After lunch proceed for the whole afternoon game drive as you head out and proceed to Arusha arriving late afternoon with a drop off to your hotel where the adventure comes to an end.

There are no reviews yet.